Please Join Mayor Briggs, your City Council and Planning Commission Members, and fellow citizens of Landrum and the surrounding community for a presentation of the draft Landrum Comprehensive Plan. The Plan was created from input gathered from community citizens and stakeholders via community surveys, meetings, and focus groups during 2015-2017. Feedback solicited on variety of key topics has now been captured in the new draft Plan. Once adopted, the Plan will guide decisions to shape the City’s future, including what Landrum will look like as well as how we get there in the years ahead. Simply put, the Plan will be used as a compass for our City officials as we continue to thrive and grow! 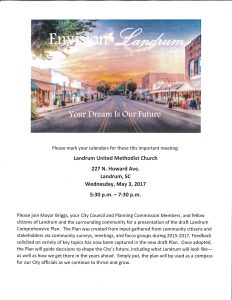